Born to parents on a small cotton farm in the early 1940s, I spent most of my formative years in the Stamford, Texas area pulling cotton and driving combines/tractors. Actually, Stamford was a metropolis compared to a little town where we actually lived. A place called Avoca with maybe a handful of people; most were relatives! To say the least, I was a “dirt poor” country boy with three younger brothers and no aspiration or encouragement to go much higher!

If any of you have had an opportunity to watch the eight-part series on Ken Burn’s “History of Country Music”, you’ll see that several of the major country music stars grew up in poverty, and pulled cotton, but had a “God-given talent” to see above their poor roots to become famous and rich singers. Not me, I had no music ability and had to work!

In the mid-1950s, my parents moved to Abilene when I was fourteen, and Dad started working in the oilfields as a roughneck. I finished high school in Abilene, played basketball for Abilene High School for three years. During the summer months, I worked for the trash department for two and a half summers (thought I would be on the street crew) and also worked on drilling rigs for a couple of summers as well. Luckily, I got a two-year scholarship at Cisco Junior College playing basketball and baseball. More importantly, I met my wife, Linda in Cisco and we married in 1962 after a short courtship.

After finishing my two years at Cisco Junior College, Linda and I moved to Abilene where I worked for General Dynamics when they were building the missile sites there to protect Dyess Air Force Base from the USSR / Cuban threats! That job didn’t last long; however, not wanting to farm or roughneck the rest of my life, we decided to go to Texas Tech in Lubbock to finish my college degree. Without a place to stay and no job, we packed the smallest U-Haul trailer (almost half full) to make the two-hour trip north to Lubbock. Thank goodness we both found jobs quickly. I delivered newspapers to the paper route guys (2 am to 5 am) every morning and (3 pm to 5 pm) every evening when the Lubbock Avalanche Journal printed two editions each day. Linda went to work for a Chevrolet dealership right away. Probably wasting a full year in Pre-Dental, I finally decided to pursue a Bachelor of Business Administration majoring in Marketing, which apparently was the correct move.

Graduating in 1965, we can honestly look back on our time in Lubbock as the hardest three years of our life. Our parents were not able to help us financially. We managed to finish without any student loans or scholarships. As Mac Davis’s song about his favorite day was “Looking at Lubbock in My Rearview Mirror”, it seemed as if it had been written for us!

After several “blown” interviews, I finally accepted a job with Continental Emsco in the oil patch, making a whopping $550.00 a month, we were rich! One positive thing that occurred in Lubbock was the birth of our first child – Jayme, who is now part of the team leading South Coast Fire & Safety. 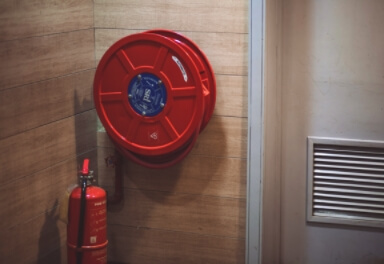